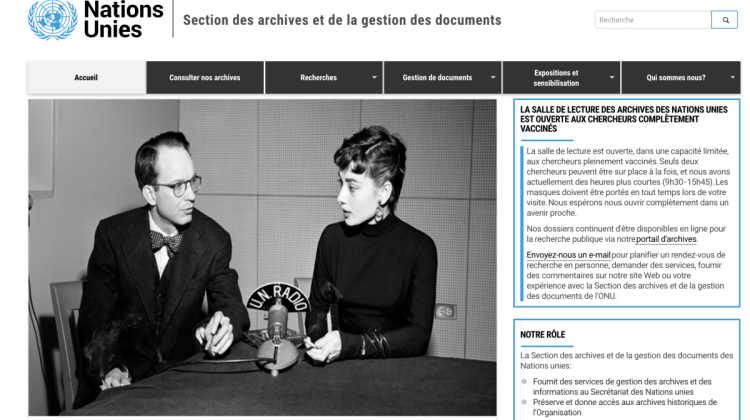 The Archives and Records Management Section (ARMS) is a relatively small unit; however, five of the six official UN languages are spoken among the team.

Because multilingualism is a core value and responsibility of the Organization, ARMS is pleased to announce that its public website is now translated into all official UN languages.

The first step in the process was to run the site text through an automatic translation programme.

The team’s French, Spanish, Russian, and Chinese speakers then compared the results with the English version and made changes wherever necessary.

As there are no Arabic speakers in ARMS, the Department for General Assembly and Conference Management (DGACM) was contracted to assist with these translations.

Because our “language experts” worked on translations outside of their primary work functions, the process took longer than expected.

In addition, the ARMS website contains many technical terms specific to the archival and records management professions of Anglophone countries, which do not always have an analogous term in other languages.

Because ARMS staff are not professional translators, the group frequently struggled to come up with appropriate terms to use in such cases.

For instance, French does not have an analogous term for “record” which led to the use of “document” as the next closest term.

After multiple drafts and months of work, the translated pages are now live. ARMS is very proud to share the new multilingual site with UN staff and the external community.

View the website in English, عربي, 中文, Français, Русский, and Español. We hope you enjoy it!