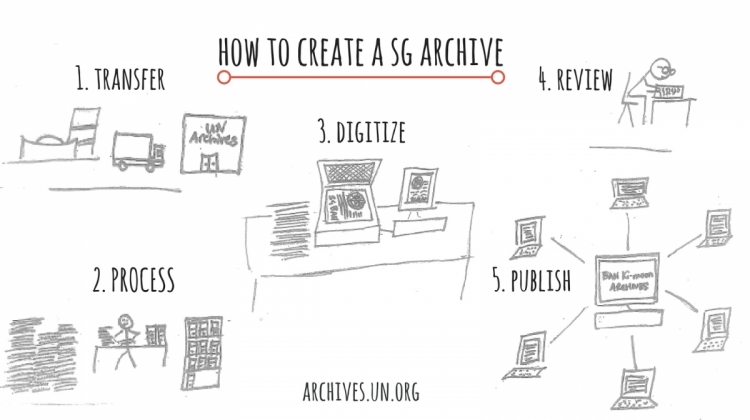 There have been nine Secretaries-General of the United Nations. When a SG leaves office, what happens to the papers that they created over the many years of running the Organization?

“In the early years of the Organization, there were no standard practices in place for what should happen to this sort of material,” says Stephen Haufek, Chief of Archives.

“When Trygve Lie left office, he returned to Norway with most of his papers. They can now be found at the National Archives of Norway. After Dag Hammarskjöld’s death in 1961, the bulk of his papers were sent to the National Library of Sweden. Fortunately, all subsequent SGs have deposited their archives with the UN.”

Nowadays, the Archives and Records Management Section (ARMS) of the Department of Management works with the Executive Office of the Secretary-General to ensure that correspondence, schedules, meeting agendas and minutes, talking points, and all the other working papers are transferred to the UN Archives. Unlike SG reports or speeches, these records are not official UN documents and have not been published.

Typically, UN archives, including those of past Secretaries-General, are only made available to the public after 20 years. With an eye towards transparency, however, Kofi Annan set the precedent in 2006 for the majority of his papers to be shared immediately after leaving office. Ban Ki-moon followed suit in 2016.

Haufek spoke with iSeek about the process of taking the hundreds of thousands of pages generated during Ban’s tenure and creating a useful online archive that will increase the understanding of the United Nations.

Although ARMS worked with the Executive Office of the Secretary-General throughout Ban’s two terms to ensure his papers were well managed and systematically transferred, this activity increased significantly in advance of the transition. Digital files are also transferred to the archives for preservation.

The final count for the Ban Ki-moon Archives Project is about 1200 boxes.

Next, a five-person team arranges and describes the archives (so they can be easily searched) and puts them in acid-free boxes for preservation.

“Without archives, it becomes very difficult to establish truth – and preserving that truth helps ensure accountability and transparency,” Haufek notes.

Everything is scanned into searchable, high-resolution files.

Each record is reviewed on a page-by-page basis by a competent authority to see if it can be disclosed.

After more than 2 years, everything that was cleared for disclosure, which was about 80%, was put up on our website.