A reminiscence of the first Security Council meeting in New York 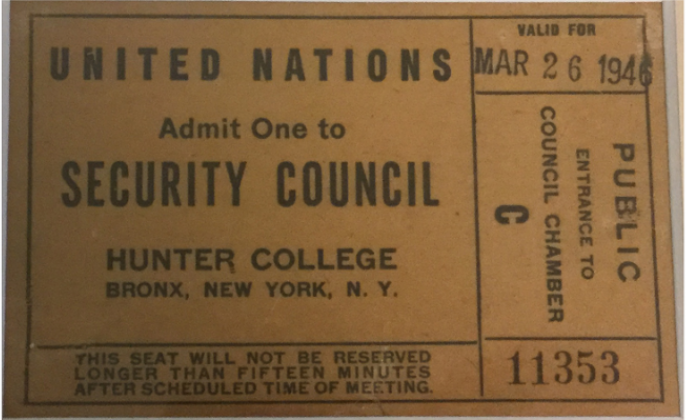 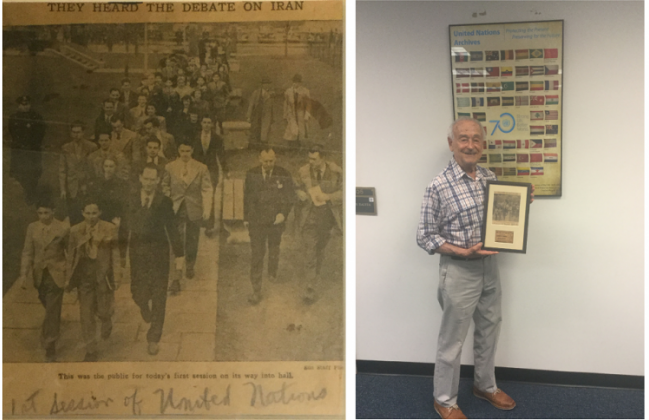 Every year, hundreds of researchers visit the Archives and Records Management Section in the Department of Operational Support (DOS) to use the more than 75 years of UN history housed there.

However, in mid-July, a very different visitor came into the archive, bringing a piece of early Security Council history with him.

Although the United Nations was founded in 1945, it took several years to select a site and build its headquarters in New York.

In fact, the first meetings of the Security Council took place at Church House, in Westminster, London.

Following that, the Security Council met in New York, but not on the current site of UNHQ, or even in the temporary headquarters at Lake Success on Long Island, New York.

For five months, from 25 March to 15 August 1946, Hunter College in the Bronx (currently Lehman College) was its home.

Our visitor, Herbert (Herb) Goldstein, was a high school student in the Bronx when he learned that tickets to attend the Security Council meeting were being made available to the public. He jumped at the chance, and, together with a friend, he arrived at Hunter College at 3 a.m. on 26 March 1946 and secured a coveted ticket.

A journalist covering the story snapped a photo of Herb among a group of lucky attendees who had all managed to get tickets to hear a debate on Iran.

Seventy-three years after the meeting, Herb walked into the UN Archives and presented us with the original ticket from that session and the newspaper clipping documenting the event. Among his recollections, he fondly recounted being given a device to put into his ear which allowed him to hear real-time translations of the proceedings.

As chance would have it, Herb is not the only member of his family with a connection to the UN’s early history. His father was a meat seller working at one of the businesses located on the site which would later be used as the United Nations Headquarters.