From Aspirations to Action: UN at 70

In commemoration of the 70th Anniversary of the United Nations, the Archives and Records Management Section (ARMS) presents key documents, photos and artefacts from the early years of the Organization, spanning from 1945 to 1951.

This virtual exhibition showcases material from seventy years of United Nations archives which are housed at the Organization's Headquarters in New York City. It is structured around four major themes: the foundation of the UN at the San Francisco Conference of 1945, the beginnings of the Organization at the temporary Lake Success Headquarters and the first challenges faced by the Organization in the implementation of humanitarian and disarmament programmes.

“We seek peace—enduring peace. More than an end to war, we want an end to the beginnings of all wars—yes, an end to this brutal, inhumane, and thoroughly impractical method of settling the differences between governments.” “Today we are faced with the preeminent fact that, if civilisation is to survive, we must cultivate the science of human relationships—the ability of all peoples, of all kinds, to live together and work together, in the same world, at peace.”

In response to the geopolitical situation in Europe in 1941, American president Franklin D. Roosevelt  and British Prime Minister Winston Churchill met in August in Newfoundland (now part of Canada), and in drafting the Atlantic Charter, they set out a vision for a post WWII world, even though the United States had not entered the war at the time. Roosevelt truly believed in the possibility of a world governed by democratic processes, with an international organization serving as an arbiter of disputes and protector of the peace. The Atlantic Charter was the second attempt by the Allied Nations to draft an agreement to promote international cooperation for peace and security, after the Inter-Allied Declaration of June 1941.

Between 1941 and 1945, at a series of international meetings attended by a growing number of Allied Nations—in Teheran, Moscow, Bretton Woods, Dumbarton Oaks and Yalta, the principles of peace, security, international justice, self-determination and human rights were discussed, refined and developed; hereby laying the ground for – as the Atlantic Charter puts it, “the establishment of a wider and permanent system of general security”: the United Nations.

“It is not the purpose of this Conference to draft a treaty of peace in the old sense of that term. It is not our assignment to settle specific questions of territories, boundaries, citizenship and reparations. This Conference will devote its energies and its labours exclusively to the single problem of setting up the essential organisation to keep the peace. You are to write the fundamental charter.”

As WWII came to a close in the spring of 1945, the representatives of 50 nations came together in San Francisco to review and rewrite the Dumbarton Oaks agreements of 1944. The conference led to the drafting of the United Nations Charter.

The documents and photographs displayed in this section are a small sample of the 3,500 cubic feet of records created at the San Francisco Conference. The documents were subsequently shipped to London to be used by the Preparatory Commission of the United Nations, which met between August and November 1945. The Preparatory Commission was the final milestone in the establishment of the United Nations.

“In giving our approval to the Declaration today, it is of primary importance that we keep clearly in mind the basic character of the document. It is not a treaty; it is not an international agreement. It is not and does not purport to be a statement of law or of legal obligation. It is a Declaration of basic principles of human rights and freedoms, to be stamped with the approval of the General Assembly by formal vote of its members, and to serve as a common standard of achievement for all peoples of all nations. We stand today at the threshold of a great event both in the life of the United Nations and in the life of mankind. This Universal Declaration of Human Rights may well become the international Magna Carta of all men everywhere.”

This was a time during which the borders and identities of countries around the world were in flux. United Nations membership expanded, some Member States declared their independence hereby creating new national identities. Now that WWII was over, negotiating and maintaining the peace was the practical responsibility of the new UN Security Council, made up of the United States, Great Britain, France, the Soviet Union, and China.

“Recently--a few days ago I heard Mr. McDougall representing the Food and Agriculture Organisation of the United Nations tell you about the needs of these countries, the shortage of food. He was telling you about calories. Now, Gentlemen, please don’t go off on calories. What these countries need is not a dietician. They need a Quartermaster. They need the food...”

Address by Fiorello H. LaGuardia, Director-General of UNRRA to the Second Committee (Economic and Financial) of the First Session of the United Nations General Assembly on 11 November 1946.

Following the defeat of Germany and Japan, tens of millions of refugees, displaced persons and prisoners of war struggled to survive in the face of extreme devastation and shortages of food, fuel clothing and essential goods. Many had nowhere to go, and could not return to their homes, now occupied by survivors and former enemies as desperately in need as they. Throughout the post-war period, the United Nations worked with Member States to find solutions for the resettlement of Jewish Holocaust survivors, stateless persons and refugees.

Between 1943 and 1947, the United Nations Relief and Rehabilitation Administration (UNRRA) distributed approximately US$4 billion worth of goods, food, medicine, tools, and farm implements to devastated areas. In April 1946, the newly founded United Nations took over the work of UNRRA and created the International Refugee Organisation (IRO) in 1947. IRO was charged with dealing with the refugee problem created by WWII in areas controlled by Western Armies of occupation. IRO ceased operations in 1952 and was replaced by the United Nations High Commissioner for Refugees (UNHCR).

“In the past, science has often been able to provide adequate protection against new weapons it has given into the hands of an aggressor, but it cannot promise such efficient protection against the destructive use of nuclear power. This protection can only come from the political organisation of the world. Among all arguments calling for an efficient international organisation for peace, the existence of nuclear weapons is the most compelling one.”

Following the discovery of the neutron in 1932, scientists quickly realised its potential to create a bomb of unprecedented force. After Hitler invaded Austria and Czechoslovakia in 1938, an international group of scientists, including Albert Einstein, Leo Szilard, and Edward Teller, contacted President Roosevelt to warn him of the threat. By 1940, the United States, in cooperation with Great Britain and Canada, had a secret weapons programme, and successfully detonated the first atomic bomb in August 1945.

The Soviet Union had known of the program since 1943, and by the end of WWII, it had its own atomic bomb programme. The dangers of a post-war nuclear arms race were evident to scientists and others, who submitted the Franck Report to President Truman, urging him, to demonstrate the new weapon to representatives of the United Nations on a deserted or barren island. The UN General Assembly resolution I of January 1946 called for the creation of the United Nations Atomic Energy Commission to “deal with the problems raised by the discovery of atomic energy”. The First Committee of the General Assembly on atomic energy and the role of the Atomic Energy Commission was held in Paris at the Palais Chaillot. October 1948. The Atomic Energy Commission was to make specific proposals to promote basic scientific information sharing on the peaceful use of nuclear energy; on the elimination of atomic weapons from national armaments and on the development of an effective safeguard and inspection system. One of the functions of the Atomic Energy Commission was to query leading scientists and intellectuals with the aim of creating a comprehensive bibliography of information and promote scientific knowledge sharing about atomic energy. British philosopher Bertrand Russell later became the first President of the UK-based Campaign for Nuclear Disarmament. Because of the disagreements between the Western Powers and the Soviet Union concerning the international control of fissile material production before achieving disarmament, the UN Atomic Energy Commission ceased its work in 1949 and was officially closed in 1952. Alarmed at the prospect of nuclear technology proliferating around the world and the number of Member States with atomic bomb making capabilities, United States President Dwight D. Eisenhower proposed the “Atom for Peace” programme in 1953, leading to the establishment of the International Atomic Energy Agency (IAEA) in 1957.

Historic flags from Member States who joined the UN between 1945 and 1947 are held by the UN Archives. Scroll through the slideshow to see which flags you recognize! 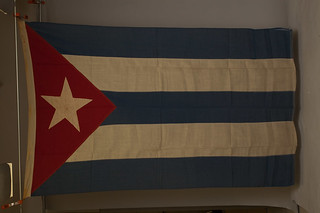