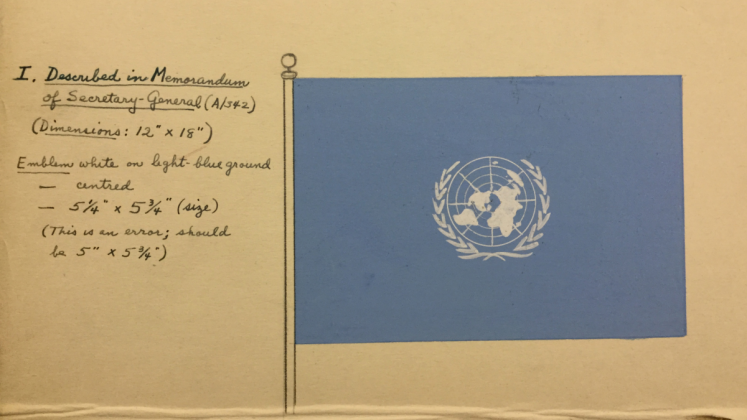 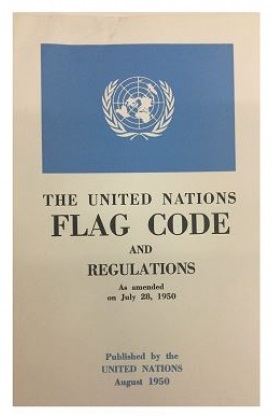 In 1946, during the Greek Civil War, UN Military Observers in Greece were conducting one of the Organization’s first operations. They lacked, however, an established way to identify themselves as UN personnel and were frequently fired upon.

To protect themselves, one UN officer embroidered a white globe onto blue fabric and attached it to their white jeep.

Thus, the unofficial UN flag was born. (In another version of this story, the Secretariat gave military observers approval to create an unofficial flag).

The creation of the UN flag had actually begun in 1945 during the San Francisco Conference. Designers settled on an image of the globe and words “The United Nations Conference on International Organization, San Francisco, 1945”. To promote the design, organizers placed the image on a lapel pin worn by all conference participants.

Originally, the globe was surrounded by laurel branches (symbols of victory) but was switched to olive leaves as a more fitting mark of peace. “Stettinius Blue” – a new colour not found on any Member States’ flag – was used as a background, in honour of Edward Stettinius, Jr., the head of the United States delegation.

On 7 December 1946, the General Assembly officially approved the design as the UN emblem and official seal (without the text). Following this decision, hundreds of suggestions for a UN flag followed; yet, the unofficial UN flag used in Greece remained the front-runner!

On 20 October 1947, the General Assembly decided that the UN official emblem should also be the official UN flag and directed Secretary-General Trygve Lie to authorize regulations for the flag design and adopt a flag code.

The first official UN flag was premiered in front of the temporary UN headquarters at Lake Success on 21 October 1947. The first Flag Code was issued by the Secretary-General on 19 December 1947 and the latest revision was issued in 2020.

Recently, the UN Archives team discovered one of the earliest drawings of the UN flag – the paint still vibrant 70+ years later.

Long may it wave!