Sport for Development and Peace

Throughout its 17 years of service, the United Nations Office on Sport for Development and Peace (UNOSDP) worked to use sport as a tool to generate peace and well-being in the international community. The UNOSDP worked in conjunction with a large network of stakeholders, including other UN entities, civil society organizations, governments and sports federations. On the 4th of May 2017, UNOSDP was closed as an apparent cost-saving measure. The sudden closing of the office ushered in a new administrative approach to the use of sport for peace and development (SPD) as the International Olympic Committee (IOC), in partnership with the UN, took the reins for future endeavors. Although the official structure of SDP initiatives has evolved over the years, the core values of such efforts have remained. 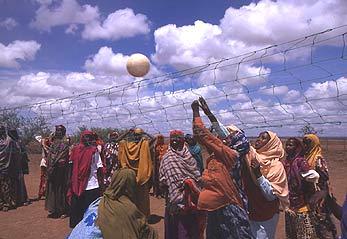 Somali refugee girls at the Hartisheik camp in Ethiopia enjoying a game of volleyball.
© UNHCR/R.Chalasani 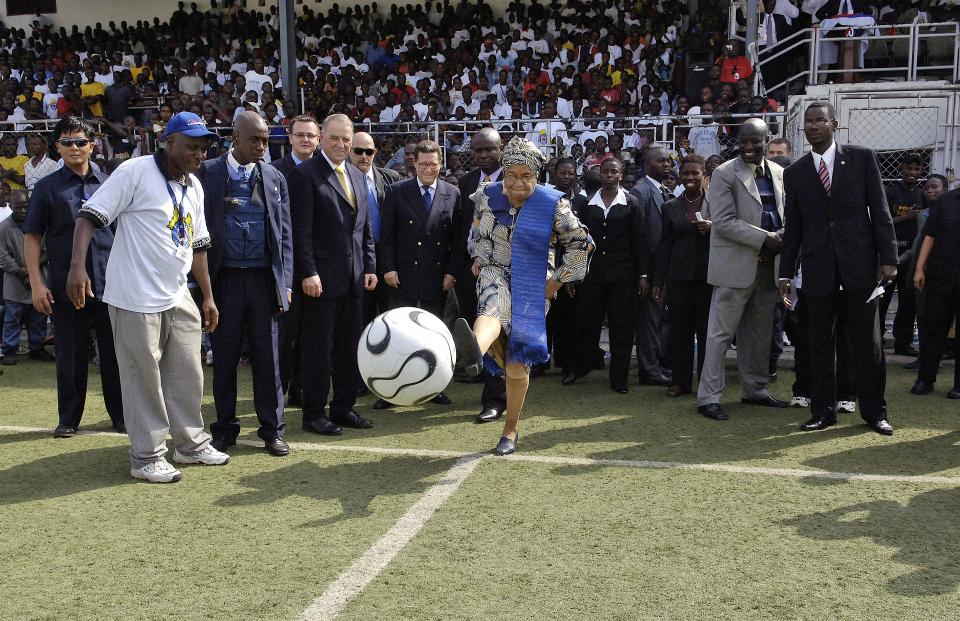 Ellen Johnson-Sirleaf, President of Liberia, kicks a soccer ball to mark the start of a "Sport for Peace" soccer tournament.
© UN Photo/Eric Kanalstein

On August 23rd , 2013, the General Assembly of the United Nations adopted by consensus a resolution establishing April 6th as the International Day of Sport for Development and Peace, a day to increase global awareness, appreciate the accomplishments of sport- based development projects around the world and to promote the use of sport and physical activity as a tool for development and peace.

Throughout its 17 years of service, the United Nations Office on Sport for Development and Peace (UNOSDP) worked to use sport as a tool to generate peace and well-being in the international community. The UNOSDP worked in conjunction with a large network of stakeholders, including other UN entities, civil society organizations, governments and sports federations. On the 4th of May 2017, UNOSDP was closed as an apparent cost-saving measure. The sudden closing of the office ushered in a new administrative approach to the use of sport for peace and development (SPD) as the International Olympic Committee (IOC), in partnership with the UN, took the reins for future endeavors. Although the official structure of SDP initiatives has evolved over the years, the core values of such efforts have remained.

Some of the earliest records of the use of sports as an aid to a humanitarian crisis date back to displaced persons camps set up by British allies in occupied zones of Germany after World War II. Holocaust survivors were able to regain a sense of personal freedom through these sports activities as they yearned to return to their normal lives after the war.
- Pictures: https://www.yadvashem.org/yv/en/exhibitions/dp_camps/index.asp
- UN ARCHIVE: Supplies for Camps in Germany - Sports Equipment (S-0523-0510)

The benefits of participating in sport were so clear that sport as a human right was explicitly embodied in Article 1 of the Charter of Physical Education and Sport adopted by The United Nations Educational, Scientific and Cultural Organization (UNESCO) in 1978. The charter states that: “The practice of physical education and sport is a fundamental human right for all.” It explicitly says that every person is entitled to participate in sport, especially women, young people, the elderly and the disabled. Since access to and participation in sport are human rights, the responsibility to ensure these rights are upheld fell upon governments, the United Nations system and others.

The history of the United Nations’ use of sports to assist individuals in devastating situations began before the creation of the UNOSDP. The UNHCR has been using sports as an instrument to improve the lives of those in refugee camps for decades. They have set up programs in Nepal, Pakistan, and over a dozen more countries. The programs contributed to the rise in school attendance rates, especially among girls, and, according to parents and teachers reduce aggression and violence.

Other UN organizations such as UNICEF have similarly used sports to increase school participation for children especially young girls in Romania and other parts of the world.
- https://www.unicef.org/romania/reallives_24792.html
- https://www.un.org/sport2005/resources/task_force.pdf

In order to promote the values of the United Nations as well as centralize and strengthen its relations with the world of sports, the United Nations office of Sports for Peace and Development was started in 2001. UN Secretary-General Kofi Annan appointed Adolf Ogi as its first Special Adviser who was succeeded by Wilfried Lemke in March 2008. Through advocacy, partnership facilitation, policy work, project support, and diplomacy, the UNOSDP used sports and physical activity to advance the United Nations’ missions and values.

Programs Around the World

In addition to meeting with leaders of governments and sports federations, speaking at international conferences on sports and other initiatives, the UNOSDP worked, often in partnership with other organizations, to set up sports programs promoting education, health, development, and peace around the world. These programs, much like the sports set up at the displaced persons camps in post-WW2 Germany, sought to improve the lives of the world’s most disadvantaged people.

Evidence of such work by the UNOSDP can be found in the UN Archives:

The UNOSDP did more than supply sports equipment and assist other organizations in their efforts to promote peace and development. They organized missions and events across the world to utilize the power of sport as a tool for generating education, health, peace, and unity.

One such mission was the UNOSDP’s “Sports for Peace” event to Monrovia, Liberia in 2007. The program was developed with the assistance of the United Nations Mission in Liberia (UNMIL), the IOC, and the Liberian government with the purpose promoting unity and peace. Liberia’s 15 counties competed against each other in football matches and winning teams played in the capital city of Monrovia for the semifinals and finals. For many Liberians, the championship game was the first time they had witnessed a gathering of people from different parts of their country united in passion for sports. These large gatherings at games were also used to raise awareness of pertinent social issues affecting the nation. The five-week nationwide event demonstrated how a shared love of sports can bring a country of people together. The “Sport for Peace” program became more than an event, it successfully spread the philosophy that sports can be a path to peace for Liberians beyond the final match.

The success of the Sport for Peace program in Liberia inspired the UNOSDP and its partners to launch similar initiatives in Monaco and Jordan which illustrated the effectiveness and power of using sport as a tool in post-conflict regions. These programs illustrated how sports can break down the barriers that divide societies, making it a powerful tool to in conflict prevention and peace-building efforts. They advance social integration and promote tolerance as well as help to reduce tension and generate dialogue.

The convening power of sport made it additionally useful as a tool for advocacy and communications. In 2009, another UNOSDP-backed event was organized to use sport not only as an instrument for peace but also as an opportunity to educate. The Stop TB Event in Kenya was a football match set up in Mathare, the slums of Nairobi, to raise awareness about the link between tuberculosis and HIV/Aids. These kinds of sports programmed serve as an effective tool for social mobilization, supporting health activities and immunization campaigns.

Beyond peace-promoting and health education initiatives, the UNOSDP focused on harnessing the power of young people to achieve global development goals through sport. In 2009 and 2010, a representative of UNOSDP joined roughly a dozen underprivileged youth from around the world as well as representatives from private and public sectors in a climb to the summit of Mount Kilimanjaro. The climbs, organized by the Kilimanjaro Initiative, a Nairobi-based NGO, in partnership with various UN entities, were meant to raise awareness of social issues in East Africa and encourage young people to be leaders of positive change in their community.

Such a focus on the empowerment of youth was later displayed in the UNOSDP in the launching of its Youth Leadership Program (YLP) in 2012. This annual series of camps held around the globe, attended by young men and women from disadvantaged communities, emphasized how sport can contribute to the development of their communities. Through participation in sports and physical activities, the young men and women would learn skills like discipline, confidence and leadership as well as principles such as tolerance, co-operation and respect. This initiative has created a large group of connected role models and change-makers with theoretical and practical training needed to improve projects in their communities. Through youth participation, sport becomes a powerful vehicle through which the United Nations can work towards achieving its goals.

Here are a few videos about YLP:

These programs and initiatives are just a drop in the bucket of the work done by the UNOSDP. Although the office is no longer in use, the use of sport as a vehicle for promoting peace and development remain alive within the UN. In 2015, sport was officially recognized as an “important enabler” of sustainable development in the United Nations 2030 Agenda for Sustainable development. Paragraph 37 of “Transforming our World: The 2030 Agenda for Sustainable Development” states: “Sport is also an important enabler of sustainable development. We recognize the growing contribution of sport to the realization of development and peace in its promotion of tolerance and respect and the contributions it makes to the empowerment of women and of young people, individuals and communities as well as to health, education and social inclusion objectives.”

Today, the IOC continues to work with NGOs, UN entities, and others to advance SDP initiatives. Their efforts focus on advocating for and utilizing sport as a means to reach international peace and development goals. Each year we celebrate the International Day of Sport for Development and Peace and on this day we remember all that was accomplished by the UNOSDP.

This report was curated by Brendan Carew